Goodbye to an Old Friend

For years I used The Omni Group’s venerable OmniWeb as my primary browser. OmniWeb had a number of features I love: thumbnail tabs, address bar text shortcuts, and integration with OS X services. Unfortunately, few people are willing to pay for a browser and The Omni Group made the very understandable decision to halt active development in 2009. I kept using it for a year or so after that but sooner or later I had to leave it behind and find a replacement.

Out with the Oldâ€¦

Opera, Firefox, and Chrome all have a lot to offer, but none feel like Mac apps. All use the ugly legacy style scrollbar in Lion, and you cannot use OS X’s define word popover on website text. Safari has been the browser I’ve been using most recently. I love the back/forward scrolling in Lion and I’ve remedied the lack text shortcuts by using Alfred, but I still miss thumbnail tabs and don’t like the address bar.

â€¦And in with the New

My browser project was initially made as a proof of concept. A week ago I tweeted a video of what I had made that day. I did it for fun â€”Â to give an idea of how I wanted a browser to look and feel so that were I to complain about the lack of a browser catering to my desires, I could point to something concrete. With WebKit handling the difficult part about writing a browser, it wasn't long before I had something usable. I originally planned to stop the project after that day, but continued working each night after concluding work on Filterstorm. I even gave it a name. Torii.

Torii are Japanese gates that mark the entrance to shrines â€” the boundary between the profane regular world, and the holy. Like it’s eponym, Torii is the gateway between our world and that of the internet.

Scrolling to the previous page in Torii 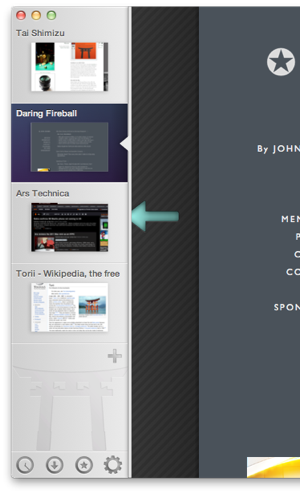 While you can hide the address bar in any browser, the interface for doing so is usually implemented as an afterthought. There may be an ugly sheet, or popup window that comes up when you access it, and it feels worse than keeping it locked to the top of the window. Really, though, there’s no good reason to keep it visible all the time. 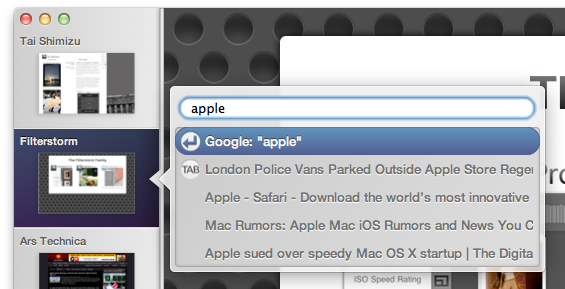 The information it presents isn’t very useful, and since you have to click or use a keyboard command to edit it anyway, why not simply keep it off the screen until you want it? Torii does exactly that. You can use âŒ˜L to access it like in any other browser, or click on the tab to bring it up.

The address bar searches your history and favorites as you type, and tells you the resulting action if you hit return. Typing an address works as usual, you can type a word or phrase to search for it as in other browsers, or use a shortcut “w torii” to go directly to the wikipedia page for torii. You can use the up and down keys to scroll through the history search results, or you can use the tab button to go directly to the first history search result, saving you a precious key stroke. Back/forward controls, as well as the close button all appear when the mouse hovers over the tab, both giving them a stronger visual connection to the content they are affecting, and allowing you to use the back/forward controls on tabs in the background. 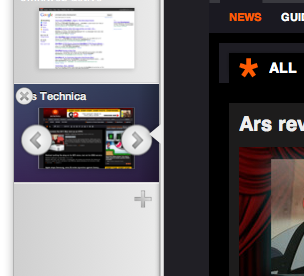 Anyone who regularly uses side thumbnail tabs knows they hold a lot of advantages over the regular sort. Even when the thumbnail is small, seeing a webs it’s color scheme can let you very quickly identify the tab you want. Scrolling with many tabs works better, as you get a list that scrolls downwards like a webpage, rather than either the rather ugly horizontal tab scrolling or list of tabs that won’t fit. Closing many tabs at once using the mouse works better, as the tabs are of uniform size and the close button for the next tab will always fall in the same place as where it was for the tab you just closed. Firefox has fixed this for horizontal tabs by making them not resize until you move the mouse away. It’s a clever solution, but not as elegant. 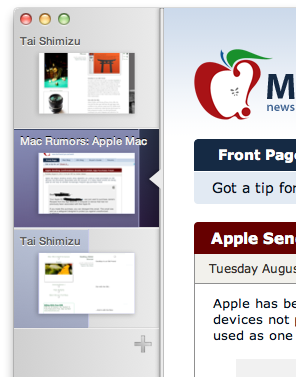 Something I haven’t before seen in a tabbing interface is using the background of the tab as a progress bar. Combined with thumbnails which update during the loading process, it gives you a very strong visual indication of the loading progress of all your tabs.

At this point I’m not sure where I’ll go with the project. I’m already using Torii regularly for browsing, but there are a ton of tiny details that need to get done. The download manager is barely functional, there’s no form completion, and no extension system. The Omni Group stopped developing OmniWeb for a reason. There’s a plethora of good, free browsers on the market, so why pay? The one thing that’s changed since then is the App Store, perhaps there is a market there.

I do hope to release a free public beta at some point in the near future.

Next Entry: Thank You, Steve Jobs

I really excited with thr new browser. I am waiting for the beta release

This is a great idea you have to write a simple browser with friendly mac-based user interface!