Note: this review is a work in progress and will be updated over the next few days with more images and details.

Battle lines have been drawn across the camera industry. Micro 4/3 cameras have been resounding successes, Sony is betting on tiny bodies with big sensors (and equally big lenses), and Pentax has its miniature Q. Canon and Fuji still have surprises in store, but with the J1 and V1, Nikon has finally shown its hand. 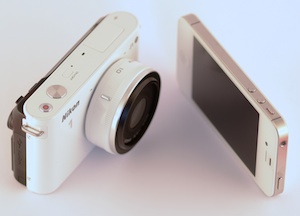 The J1 is tiny. By itself, the body is close in size to an iPhone 4/4S, but 3 times thicker. It feels significantly smaller than the Micro 4/3s cameras Iâ€™ve used, especially when taking the size of lenses into account. Even the Canon G12 is bigger than the J1 despite the Canonâ€™s much smaller sensor. Nikon found a hole in the market, planted a flag, and claimed this newfound territory in their own name. 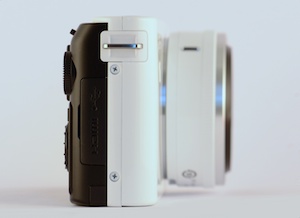 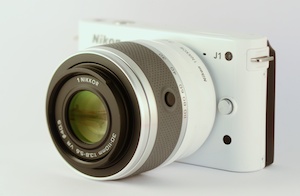 While Fuji looked to classic rangefinders when designing the X100, Nikon seems to have been eyeing the iPhone with envy when designing the J1. The J1 can’t hope to match the pure functional simplicity Jony Ive et al. have created, but cameras are a different beast than phones. The best iPhone camera interface couldn’t hope to compete with an array of buttons and knobs for controlling a camera, just as no amount of buttons and knobs could match a touchscreen for creating masks in Filterstorm. 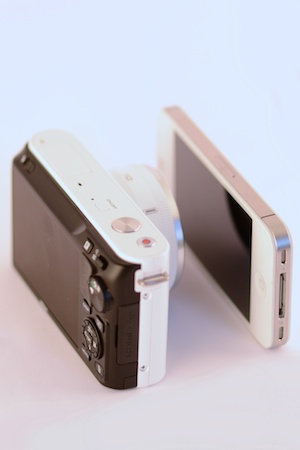 The white (it also comes in silver, red, pink, and black) part of the camera is metal, whereas the black on the back is plastic. The metal has a higher quality feeling to it than does the plastic, but in overall it doesn’t feel at all cheap.

The front of the J1 is simplicity itself, with just a single button to release the lens. The front also contains other necessary bits, the lens mount, an autofocus assist lamp, remote trigger IR receiver, and two microphones. The top has three buttons: power, shutter, and a video record button â€” which oddly only works if you’re in video mode (more on that later). The tripod mount on the bottom is properly aligned with the lens, but the battery cover is a bit flimsy. On one side, you’ll find HDMI and a USB port. I think audio-in as the V1 has would be more useful than HDMI.

The rear buttons in general are comfortably placed for my small hands, so long as the camera is being supported on the bottom by the left hand (which you should be doing anyway). If you hold it with only the right hand, you can shoot fine, but probably won’t be able to change settings. 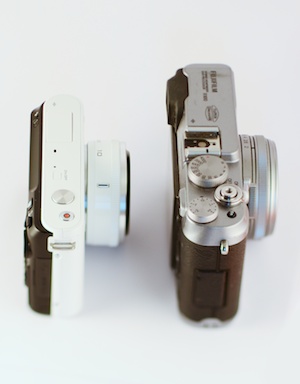 The J1 feels eager to please. It starts up quickly, in approximately the time it takes to move your finger from the power button to the shutter. If you’re using a zoom lens, unlocking and extending the lens will automatically turn the camera on, a nice touch. Unfortunately, locking the lens will not turn the camera back off. It shoots at a fast 5 fps under manual settings and can go up to an amazing 60fps in auto exposure, though the buffer will understandably run out very quickly at that speed. There’s no appreciable shutter lag, everything feels very snappy with one caveat. You cannot turn off image review, which means when you’re not shooting continuously, there’s approximately a 2 second shot-to-shot delay. I hope that will be fixed in a firmware update. Autofocus is fantastic. In decent light when using phase detect, it’s as fast as a good SLR. Things slow down when it has to fall back to contrast detection, but it’s still best in class in terms of speed and accuracy.

Manual focus is okay. It’s controlled by a rotating dial on the back of the camera. It’s probably the best manual focus I’ve used that’s not a focus ring on a lens, but it’s still not as good as having a the real thing. Hopefully Nikon will release some lenses with focus rings, but I’m not holding my breath. 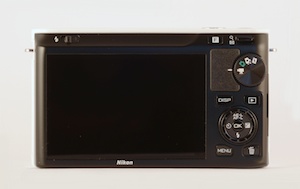 The back of the camera has a nearly useless mode switch with 4 options: video, still image, best shot selector, and the baffling motion snapshot. For some inexplicable reason, Nikon’s marketing department seems to be in love with the motion snapshot, but it just seems bizarre to me. The video mode option on the dial seems odd to me, too. There is a dedicated video recording button on the top of the camera, but it only works in video mode. It seems to me that the video button on top should simply take a movie with the current still image settings so that no special video mode is necessary. Please write in the comments if you can think of a good reason for Nikon to have done this. You can also take full resolution still images while recording a movie, which unlike the dedicated motion snapshot feature, I could see being useful. 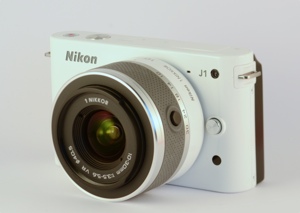 If you want to switch between PSAM modes, you must do so through the fast and well laid out menu system. It’s still not as good as having the dedicated knob, but not terrible, either. The PSAM controls are analogous to those on Nikon’s DSLRs. Instead of having a primary and secondary rotating ring for changing shutter speed and aperture, the two-way switch on the top right acts as the primary control, and the spinning ring on the back acts as the secondary. In Aperture priority, you can press the switch on the top up to increase aperture/down to decrease, while in shutter priority and manual it works to control shutter speed, with the aperture controlled by the rotating ring in manual mode. Exposure compensation is easy to access as well. Since the exposure compensation button is part of a 4-way dial under the ring, you can press it and rotate the ring to change exposure compensation in one quick motion.

My one complaint with is with ISO controls; you have to go through the cameras menus in order to change ISO. The exposure compensation button does nothing in manual mode, and could have potentially been mapped to bring up the ISO menu. It would be a huge help and even makes logical sense as the use can be analogous. The function button on the top currently currently brings up continuous/single shutter controls, an option in the menu to change it to control ISO would also be fantastic. I doubt Nikon will change any of this in a firmware update, but they could.

Image quality reminds me of the D60, but with more noise at low ISOs. It’s an impressive feat for a camera with a sensor a bit under 1/3 the area, even if it does come a generation or two later. Color reproduction and dynamic range are both good. The lenses remind me of Nikon’s DSLR kit lenses, but perhaps a bit better. They’re plenty sharp, but are slow and with a decent amount of distortion. They also focus faster than cheap DSLR kit lenses. I will have more information in coming lens reviews. If you have a program that can read the J1 RAW files, you should look at the difference between some of the RAWs and JPEGs posted. You can get some more detail out of the RAW files than the out of camera JPEGs are producing. 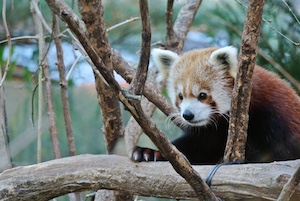 Low light performance is worlds better than point and shoots, probably close to micro 4/3 despite the difference in sensor size, and bad compared to modern DSLRs, as is to be expected. Fast primes would be nice. 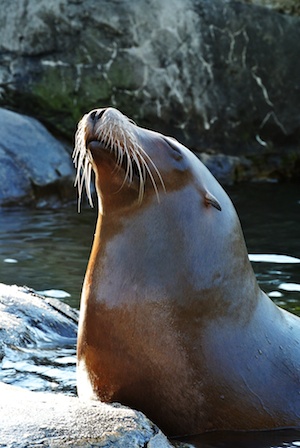 Things I Think are Just Okay I’ve quite enjoyed shooting with the J1 so far, and will be sad to give it up. Alas, it was purchased for my brother to take with him on his aforementioned unicycling trip. He needs something light with good image (and video) quality for the trail, and I can’t think of a better option, though the Fuji X10 and X100 might both be decent choices, too. Most of my complaints are about the fact that I’m not the target consumer for the J1â€”I want easier access to manual options and the J1 wasn’t built for that. However, the V1 was supposed to be, and all my complaints about controls are identical for that camera.

Despite the complaints given, the J1 is a fantastic camera. The general responsiveness, especially of autofocus makes it feel closer to a DSLR than other mirrorless cameras. I don’t believe there is anything of comparable size that can match the image quality and performance. Certainly Micro 4/3 cameras can match or best the IQ, but when lenses are taken into account they’re not too different from a small DSLR in size. It has rough edges, but is a great little camera. 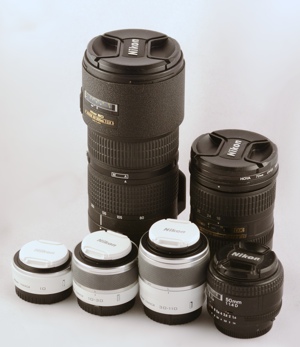 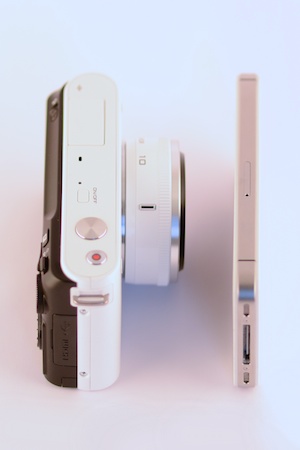 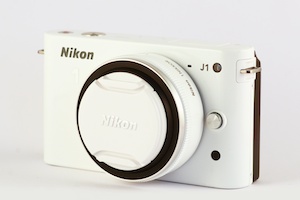 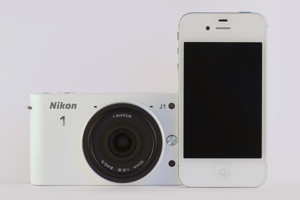 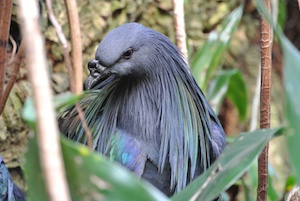 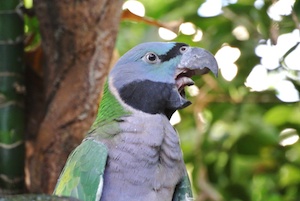 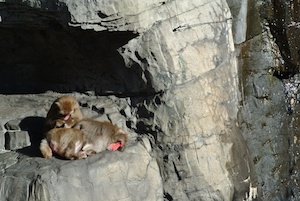 This is a very nice review. Thanks for posting images that can really reflect what this system can do.

I absolutely love those iPhone comparison pictures you posted, they’re so pretty!

We are able to translate and localize User Interface, Help Document and App Store Text.

We are able to translate and localize User Interface, Help Document and App Store Text. With our experience and expertise in mobile app localization, you can reach millions of Chinese iPhone/Android users who only speak Chinese – they are interested in new apps and games, but they can’t read English or other languages.

We have 5 in-house translators and work with around 50 experienced freelance translators. We’re able to produce top quality translations at competitive rates.

We do NOT use machine translations! We only use professional translators!

Please do not hesitate to contact me in case you need more information or have any question, I would be very happy to answer.

Thank you very much!

I look forward to hearing from you soon.