The official Twitter appâ€™s (nÃ©e Tweetie) innovative pull-to-refresh system has been a big hit, one copied by many apps. If youâ€™re not familiar with the design, the screenshot below shows the interface. You have a list of tweets like in any twitter (or list based) app, but instead of hitting a button to refresh, you pull down the list just past where it ends and it will refresh.

Though Iâ€™ve read of distaste for the feature from some, Iâ€™m personally a big fan and have had it on my mind while working on Filterstorm. The reason itâ€™s so fantastically useful isnâ€™t hard to understand; in other apps I have to move my thumb into a relatively awkward position to hit a button at the bottom or top of the screen, but using Twitterâ€™s system, you can put your finger nearly anywhere on the screen and simply drag down a bit.

In interface design, this property is called Fittsâ€™s law. Loosely, Fittsâ€™s law states the closer to, and larger the target for the pointer, the faster the pointer can reach the target. Since weâ€™re talking about accomplishing a goal â€” refreshing the contents of a list â€” I would add the complexity of the gesture as a parameter to the amount of time it takes. Tapping is easier than swiping is easier than pinching, with a number of other gestures in the spectrum. In Twitterâ€™s case, swiping is a bit more complex of a gesture than tapping, but thatâ€™s overshadowed by the other two variables. The distance to the list of tweets is going to be very small, since the list takes nearly the entire screen, and the size is huge.

This brings us to cropping. Cropping, like nearly all of Filterstormâ€™s tools, was originally designed for use on iPad, and like many of Filterstormâ€™s tools, did not make the transition to iPhone well. Itâ€™s accomplished by moving control points along the cropping box to scale the size, or using a center point to move the box; zooming in and out does not alter the crop. The problem on iPhone were that the control points on the corners were too large, obscuring much of the image making you zoom in and zoom out to help see what youâ€™re doing. Worse yet, the drawing method is slow on the retina display. 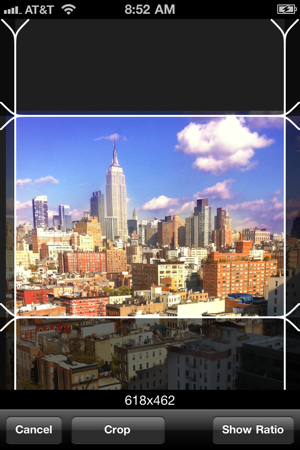 The new cropping interface is much cleaner. The lines are less obtrusive than the large box, the irrelevant toolbar no longer shows at the bottom, and itâ€™s faster and easier to use. Almost the entire screen can be used for pinching or flicking the image to position it in the cropping rectangle.

The old cropping interface was a two step process, using the interface above, you choose the cropping ratio and whether or not you want to be locked into that cropping ratio, then you crop.

The new interface never asks us this first step unless we want it to. Tapping the show ratio button will at any time bring up the cropping ratio boxes (defaulted to the imageâ€™s original ratio), and then you can swap the values or put in your own and the cropping lines will move to match.

Now that I have moved to working on Filterstorm full time, Iâ€™m going to be spending more time cleaning up existing features to make them better. The new cropping interface will be out when Filterstorm 2.6 is released along with new features including borders and double exposures.

Next Entry: The Long Road to Pro Part 1

It appears nothing is here. Why not contribute?